The fourth instalment of our Dare to Debate seminar series asks 'Can the internet ever be a safe place for our children?'

Our latest Dare to Debate seminar series took place on Wednesday 2 March. This was a packed event with more than 50 people from law enforcement, child protection and internet industry in attendance.

Our speakers discussed how social media, at the same time as offering many exciting opportunities for children, can also harbour some very real risks.

Social networks have become a vehicle for round-the-clock bullying, grooming and exposure to pornography, which we know can give young people a warped view of sexual relationships.

We believe that all children should have the same protection online as they do offline. We've been working wih the govenment and industry to make children safer, but despite some progress we believe there's much further to go.

"Industry must demonstrate its responsibility for protecting children by designing effective safety features. You don’t build a car without brakes and you shouldn’t create social networking sites without safeguards for its users."
Peter Wanless / NSPCC CEO

Last year 3,150 children, some as young as 9, contacted the NSPCC’s ChildLine service with concerns that they were being groomed online. Some of these had been approached through chatrooms linked to games they were playing.

Children find it easier to express themselves online and we know that 1 in 4 ten-year-olds has access to social networking sites even though they're technically under-age.

So far the industry has been left to police itself. But the NSPCC wants them to be far more pro-active and is calling for:

"The internet offers a vast treasure trove of learning for children and the chance to engage with others who share common interests. While we don’t want to deter children from getting the most from social media and gaming sites everything is not always what it seems. "
Peter Wanless / NSPCC CEO

How safe are the sites, apps and games your child uses?

Run in partnership with O2, Net Aware offers parents useful information about each social network, including the age guidance for users.

Whether you want to set up parental controls, adjust privacy settings or get advice on social networks, experts from the O2 & NSPCC are here to help.

The Breck Foundation, was formed in her son’s memory. At 14-years-old, Lori's son, Breck Bednar, was groomed online through a gaming forum and murdered by teenager Lewis Daynes.

As an internet safety campaigner, Lori is striving to make everyone aware of online bullies and predators. She tours schools speaking to children about the dangers of the internet and how they can stay safe.

As an European Advisor for Trust and Safety at social networking site Askfm. Annie has spent 10 years as Global Head of Content Standards at Vodafone and led many online industry self-regulation initiatives at a UK and European level.

Annie is also a qualified child protection social worker and a member of the Advisory Panel on Children's Viewing at the British Board of Film Classification (BBFC). She was awarded the UK Internet Hero Award in 2007 by the Internet Services Providers Association and an OBE in 2009 for services to children and young people online. 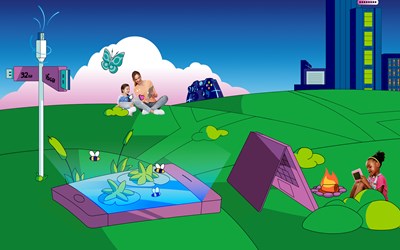 Call our helpline, visit an O2 Guru or explore our online safety advice for everything you need to keep children safe online.
Our work with O2
0
Share this