Our very own marathon man, Richard Hayes, raises more than £4,000 for our work with his '13 in Thirteen' challenge

Thirteen half marathons, 170.3miles and several pairs of running shoes later, Richard Hayes has raised £4,520 (and counting) for the NSPCC and completed his '13 in thirteen' challenge.

Having already completed thirteen 10k races in 2013, Richard, from Sheffield, set his sights higher by challenging himself to double the distance and complete 13 half marathons from January 2014 to January 2015.

Back on home soil in Yorkshire, at the Brass Monkey Half Marathon in York, Richard crossed his final finish line and is elated to have smashed his fundraising target of £4,000 for the NSPCC, a charity which he says is close to his heart.
He explains why he decided to create the '13 in thirteen' running challenge in the first place.

"I kept to running as it's become a very important part of my life and something I've become quite good at thanks to the challenges."
Richard Hayes / NSPCC supporter and Super Runner

"I always wanted to have the chance to say thank you to Childline and the NSPCC after they helped me in so many ways as a child. After I lost 4 stone in 2012, I took up running to keep the weight off and got the running bug! I enjoyed doing 10km races at the time and thought 'why not do 13 of them in 2013?'

"That is when the first challenge started. When that came to a close in December 2013, I felt I had unfinished business. So I decided to keep the name and up the ante and do 13 half marathons over 13 months. I kept to running as it's become a very important part of my life and something I've become quite good at thanks to the challenges."

What has been your favourite race to run over the past thirteen months?

"That would have been the Great Birmingham Run in October - my 10th race of the challenge. Up until that point I had not gotten the times I had trained for at the half marathon distance. However, in that half marathon, I decided to treat it like a 5km race and started faster than usual and was able to keep the pace. I knocked 7 minutes off my personal best and have not looked back since."

You set your sights high on raising over £4,000, how did you feel when you smashed your target?

"So setting a £4,000 target was hard and meant I had to think outside the box with my fundraising, which is where ideas such as auctioning off the LEGO mini figures came from. To beat the target felt like a weight had been lifted. It meant I could focus all my efforts on my running, and the total then carried on increasing without me having to push it."

Were there any points along the challenge where you thought about giving up?

"No never! I'm too stubborn to quit, even in races like Sheffield. (The race was cancelled but we didn’t find out until we crossed the line! If that wasn’t bad enough during the race I got struck down with a stomach bug, so had to keep going in and out of toilets, but I would have crawled home if I had had to). I even went to Plymouth two weeks later to keep the challenge alive.

"Then at the Great North Run, with just 2 miles to go, I was flying along the route, and then collapsed as soon as I crossed the finish line. The doctor told me I had tonsillitis but because I had pushed so hard in hot conditions it had made it ten times worse. For me, I knew that I was out there making a difference and wanted to prove the people who didn’t think I’d be able to complete the challenge wrong!"

"The sense of achievement is amazing and the high you feel when you cross the finish line is such a buzz. Knowing I make a difference to children out there is worth every bit of blood, sweat and tears."
Richard Hayes

How did it feel once you crossed that final finishing line?

"Awesome, I had given everything in that last race to smash my personal best and to cross the line felt awesome and emotional. My legs were like jelly and to be surrounded by my friends and family was just an amazing, feeling."

Who has been your greatest support throughout the challenge?

"My wife and daughter without a doubt. They have come to every race, not just my challenge races, but every race. Last year I raced over 50 times and no matter the conditions they have been there cheering me on.

"Claire Reading from the NSPCC fundraising team has been my contact throughout my challenge and has been an awesome support. The public has been amazing and the fact I had a personal connection and story to tell helped me, as well as the support and many friends I made throughout this challenge."

"I'm still running, but now training for the London Marathon with an aim to get a 'Good For Age' place so I can race in places like Boston and New York. I want to get as fast as possible at all distances from 5k up to a marathon, then, maybe one day, I will tackle 13 marathons. Plus, in August I am racing a train in Wales!"

WHAT WOULD YOU SAY TO ANYONE WHO WAS THINKING ABOUT ENTERING AN EVENT TO RAISE MONEY FOR THE NSPCC?

"Do it, as you never know what tomorrow brings! The sense of achievement is amazing and the high you feel when you cross the finish line is such a buzz.

Knowing I make a difference to children out there is worth every bit of blood, sweat and tears."

To find out more about Richard's amazing journey, visit the official 13 in Thirteen challenge website.

If you'd also like to show your support for Richard and his next challenge, visit his JustGiving page. 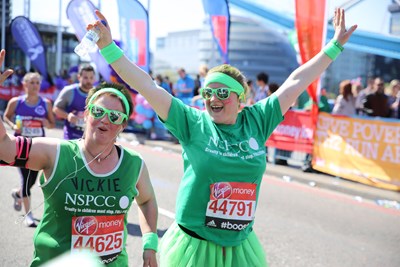 We've helped almost 1.8 million children to recognise the signs of abuse and know to speak out if they're worried. Donate today and help us reach one more child. 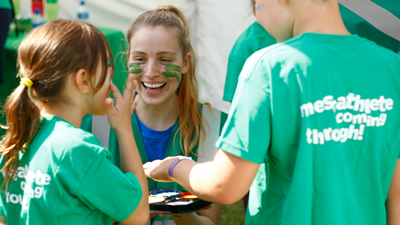 Volunteer today and join our fight for every childhood. Together we can protect children and prevent abuse.
Volunteer to help children
0
Share this